Racking or how to clean up the wine

By this gesture, the winemaker decants the wine during aging to eliminate unwanted deposits. This operation can be repeated several times. This is to clarify the wine.

It is a life-size decantating, a "clean-up" of the wine, essential to promote its evolution in the best conditions. The purpose of racking is to separate the wine from its lees during its ageing.

By this operation of paramount importance, the winemaker eliminates the deposits that have become undesirable, consisting of fermentation residues, precipitated scale that accumulate at the bottom of the barrel or tank. This is called lees. Prolonged contact of these residues and the wine may induce aromatic deviations, reduced or "rotten egg" odors, bad tastes, or even diseases. In short, nothing very pleasant!

In concrete terms, wine is transferred from barrel to barrel, from tank to tank or from barrel to tank, by pumping, by flow or by pushing a gas. For red wines for ageing, racking is often carried out with intermediate aeration. The operation, through subtle chemical reactions, promotes the formation of aromas and the maturation of tannins, fixes the color, eliminates excess carbon dioxide and reduced odors. The time to extract is determined by the tasting.

The quality and number of racks have a huge influence on the success of the ageing. The practices differ according to the regions, the grape varieties, the color and nature of the wines, the vintages and the secret habits of the winegrowers. For example, the number of racks for a wine for ageing can vary from five to eight in Saint-Estèphe. Here again, the "best" is the enemy of the "good": too much racking can oxidize or emaciate the wine. Exception to the rule: some winemakers extract little or with fine lees in order to enrich the aromatic complexity of their wines; this is the case, for example, of Château Le Boscq.

There are several ways to track. One of them, the most classic, is the tracking by flow of the wine, then pumping with an intermediate aeration:

> The winemaker tilts the barrel slightly.
>The wine flows into a container where it is ventilated for a few minutes. The lees remain in the barrel which will then be washed.
> The wine is then pumped and reintroduced into another barrel, clean and perfectly cleaned.

Crushing consists of bursting the grape berries to extract the must without crushing the seeds.

Crushing can occur before the actual vinification or after a carbonic maceration or a cold pre-fermentation maceration. This operation also allows a fermentation start by releasing the juice and putting in contact with the indigenous yeasts present on the skins of the berries of the grapes.

Punching of the cap is a winemaking technique that consists of pushing the marc cap on the surface into the liquid part of the must in fermentation. This operation is performed during vatting to promote maceration, and / or to prevent an acetic bite.

Pumping-over begins from the first vatting.

This operation is essential for the extraction of tannins, the color and aromas contained in the skin and seeds during alcoholic fermentation.

Jean-François Delon, owner of Château Ségur de Cabanac, explains what the running-off consists of, a winemaking operation that makes it possible to recover the must without the marc, by simple natural flow, to obtain what is called the "drop wine".

Before the actual "pressing" operation, it is necessary to decuvate the marc, that is to say to empty the tank of these residues of grape berries which have emptied practically all their juice.

So we evacuate this marc, which fell to the bottom of the tank by taking it out with a shovel as it is well shown on this video.
Previously, the drop juice is poured (see previous video) and then the remaining solid phase of the tank is extracted to press it and obtain the press wine.

To obtain the press wine, the marc is put in the press. So far everything is logical. The rest too. Before proceeding with this action, other steps preceded.

After crushing, destemming, maceration and fermentation, this is the moment of running-off of the tanks in order to put an end to maceration.

By gravity, the wine is separated from the marc*. The wine that then flows, is called free-run wine. The marc simultaneously is decuved and then pressed in order to remove the soaked wine: it is the press wine richer in color and tannins.

Depending on the type of wine you want to make, free-run wine and press wine can be assembled immediately or after aging (or aging in barrels). At this stage, a second fermentation, called malolactic fermentation, is triggered. It naturally reduces the acidity of the wine.

*These are the solid parts of the grapes (stalks, skins, seeds) still impregnated with alcohol.

From the finish line to the selected grains

The complete video: from the reception of the cases to the grains that will make the wine. The stages, after the harvest, and before the vatting in other words the backstage of the finish line. Everything you ever wanted to know about manual sorting, scraping, the circuit up to the grinding of the stalks, optical sorting, density sorting, crushing...

Not to mention the use of the "girafes"(giraffes) also called "sauterelles" (grasshoppers), machines that could be called grape grain escalators.

The hydrometer or density meter (alternative names: mustimeter, wort scale or syrup scale) is a glass or metal instrument used to measure the density of a liquid using Archimedes' principle.

The mustimeter, an essential tool (with the thermometer) for monitoring fermentations.

The increase in density in the musts makes it possible to follow the evolution of the sugars. When there is no more sugar, the fermentation is finished and the density decreases 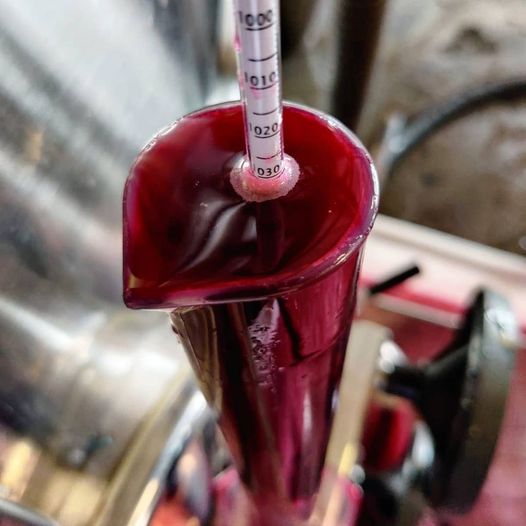